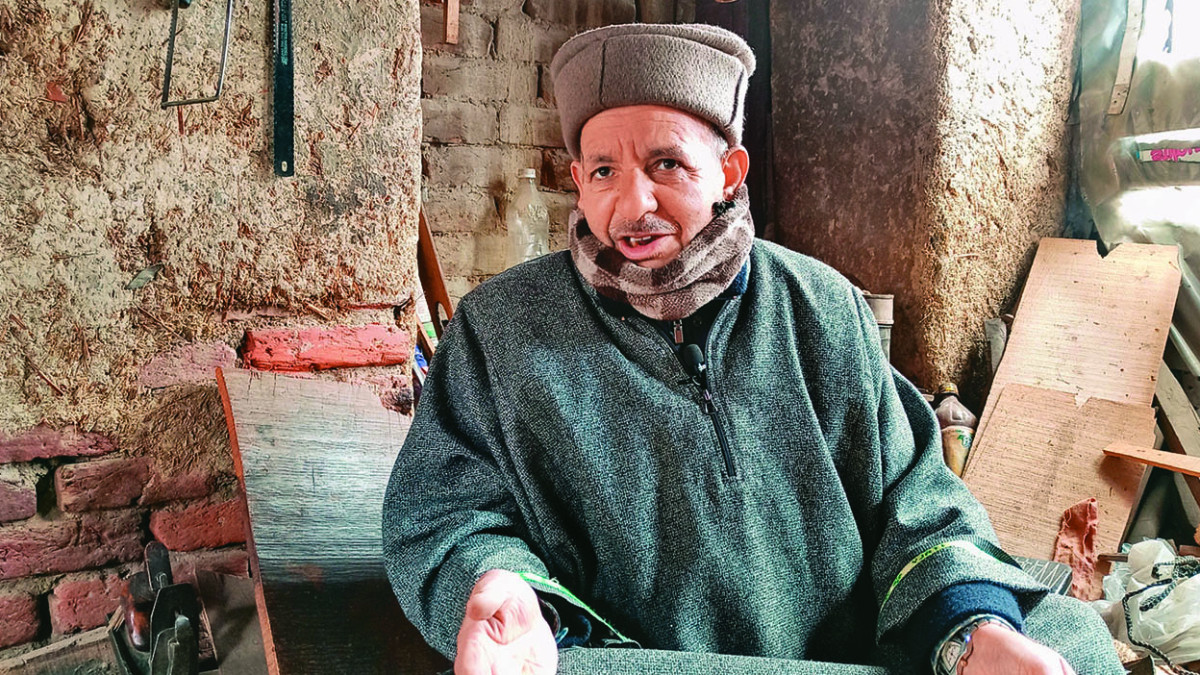 On the banks of the Jhelum in the old town of Srinagar is a 300-year-old structure, where Ghulam Mohammad Zaz has been handcrafting stringed musical instruments for over seven decades. In a small room on the first floor, whose walls are soot-soaked with mud and cracks here and there, Zaz has been bringing musical instruments to life since he was only 12 years old.

Zaz learned his art by accident. In 1953, the 12-year-old fell ill with typhus and was taken to the famous doctor Kashmiri Pandit Gaash Laal, who after assessing Zaz’s state of health told his parents that he could not continue his studies because his body would. ‘t be able to withstand the rigors. So when Zaz recovered, his uncle took him on as an apprentice in the workshop run by his ancestors for eight generations.

Zaz, like his ancestors, makes a range of stringed instruments like santours, sitars and rababs which embellish traditional Kashmir Sufiyana music, as well as classical Hindustani.

Zaz’s masterpieces have been used by world renowned Kashmiri musicians like Pandit Shivkumar Sharma, the santoor maestro who passed away in May this year. Sharma has received several national and international awards, including the Padma Shri and the Padma Vibhushan.

“Pandit Jee was an ascetic of melodies,” says octogenarian Zaz, adding, “there was no match for his playing. No one could beat him in competition.

Zaz santoors have been used by acclaimed Kashmiri players like Pandit Shivkumar Sharma, who died in May this year, and Pandit Bhajan Sopori.

For Zaz, Sharma was not just a client. Over time, the two had developed a loving relationship and they met whenever Pandit Jee was in town. “Pandit Jee loved my job, and thanks to him, I had dozens of customers who ordered santours,” says Zaz. Outlook.

“I would ask my clients who recommended them to me, and without thinking they would say, ‘Pandit Jee’,” he adds. Apart from Sharma, Zaz also made santoors for another Kashmiri legend, Bhajan Sopori who breathed his last on June 2 this year.

Zaz believes that the intrusion of modern and western forms of music into the cultural fabric of Kashmir has stifled indigenous forms of music, due to which, he says, the number of local orders for musical instruments he manufactures has drastically decreases. Thus, most of the orders it receives now come from European and Gulf countries, and some Indian metros.

“No one takes our traditional and cultural forms into account anymore,” he laments. “Especially young people don’t want to listen to traditional music.”
Zaz was only 21 when he built his first instrument on his own, a sarangi for a regular customer. Now in his 83rd year, he is the last to practice this age-old art. He has three daughters, all of whom have chosen different career paths, leaving no one to advance his craft. But Zaz feels no remorse. He says Outlook, “This job has allowed me to earn a living. I am happy and I will do the job until my last breath.

You can gauge Zaz’s declining health from his pale hands, a network of blue veins spread across them, his swollen fingers, and his neatly trimmed coarse fingernails that are clean but lack any shine. He speaks eloquently, with long pauses, and he often stops just to catch his breath. His gait is slow, but despite the eighty years that have weighed on his body, he does not sag and his back is as straight as a Russian poplar. For the past few years, Zaz has struggled with his well-being, “however,” his daughter tells Outlook, “he never gave up on work.”

The most recent setback came to Zaz during the second wave of the Covid pandemic, when he contracted the dreaded virus that kept him bedridden for months. “It robbed me of my strength, but I conquered it. Here I am, working again!” he shouts triumphantly. But, the virus still completely changed his body.

“If I try too hard, I get out of breath and feel a strange weariness. The winter made it worse, I could feel the pain in my lungs,” says Zaz, adding, “this virus [Covid-19] is ruthless.” Despite his growing weakness, Zaz leaves his house early in the morning for the workshop and works, but not as diligently as before.

“How can I stop working? I have been in this art for decades. It’s in my blood,” Zaz says, adding, “It’s all I’m meant for.

(This appeared in the print edition as “Last Maestro”)

Did you like the story? Do you or your friends have a similar story to share about “ordinary” Indians making a difference in the community? Write U.S. If your story is that compelling, we’ll post it online. Click here to submit.

20 years ago, the beginnings of NERD marked the dawn of an era without limits

Fredrik Nielsen: the artist who breaks the rules of glass art