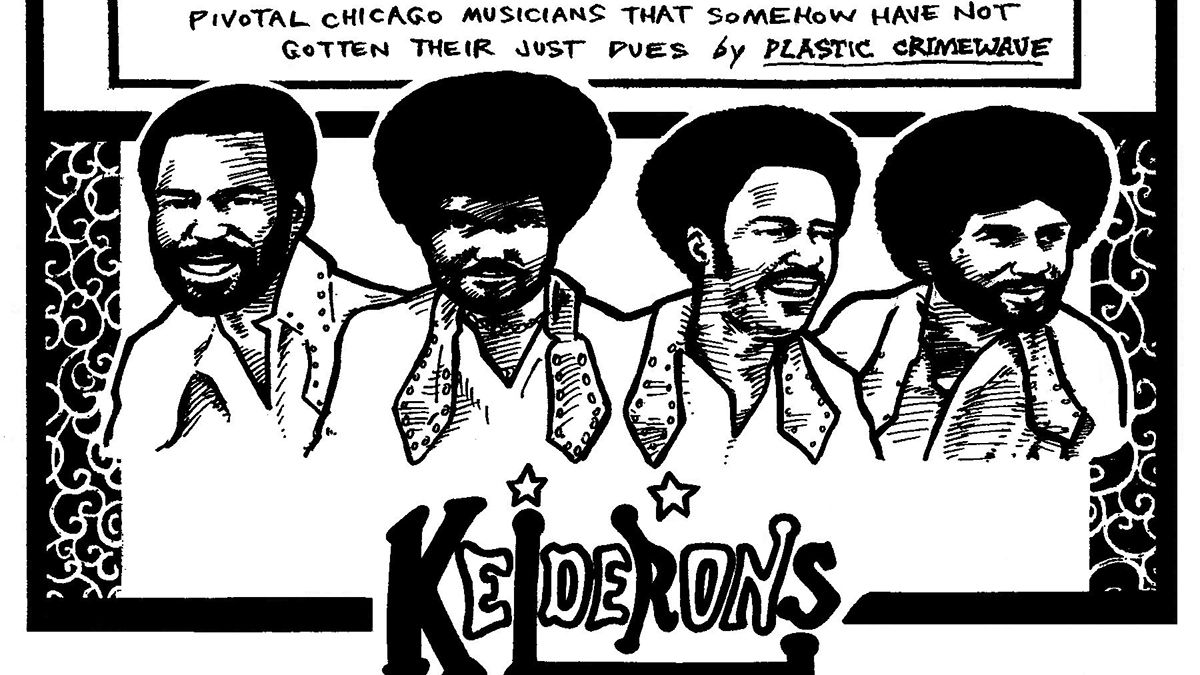 Since 2004, Plastic Crimewave (aka Steve Krakow) has used the secret history of Chicago music to shine a light on valuable artists with Chicago ties who were overlooked, underappreciated, or never noticed in the first place.

It’s sad when a talented group’s closest touch to stardom is almost finishing the soundtrack of a movie that never was, ending up with nothing but demos where the one of the guitars is out of tune. To make matters worse, they had recorded under a new name that hardly anyone knew. Recorded music history is littered with such “almosts,” but the Kelderons’ near-miss is particularly sad because they managed to release a single that’s adored more than 50 years later. Buckle up for the curious story of how it all went wrong for this Chicago soul band and how modern audiences were finally introduced to their music.

Brothers Darrow and Ronnie Kennedy grew up in the Rockwell Gardens public housing project in East Garfield Park with their friends Leroy Pointer and Ted Patton, and while in high school at Crane Tech, all four formed the Kelderons. Other Crane alumni included Eldee Young (of Young-Holt Unlimited and the Ramsey Lewis Trio) and the Ideals, and members of the Pharaohs (a soul-jazz band that provided musicians for Earth, Wind & Fire) attended Crane Junior College, which shared the building on Jackson in Oakley.

The strange word “Kelderons” is believed to come from a combination of letters in their surnames, although the origin of this “L” is unclear. The band sang in school hallways and often performed at local talent shows. At Precious Blood Church on Western and Congress (now an alternative high school called Ombudsman Chicago West), they won one such contest against their rivals the Modern Men. After the defeat, Modern Men members John Banks and Allen Brown wanted to partner with the Kennedy brothers, so the Kelderons let Patton and Pointer go. Joined by Banks, Brown and schoolmate Bruce Rodgers on guitar, they ramped up and became Crane’s most beloved band.

Their ambition did not go unnoticed and shortly after graduation they were introduced to Marcellus Burke, brother of Clarence Burke, patriarch of the family whose children made up the Five Stairsteps (of “Ooh Child”). Marcellus was a policeman but managed musicians on the side (at the time it seemed everyone did), and he added the Kelderons to a review he had booked.

By 1967, the band was playing most nights on the South and West Sides and in the Southern Suburbs, mostly covering current Motown and other hits, and this grind quickly turned them into a formidable club act. Producer Jimmy Jones, who worked with the Twinight label (home to soul gods such as Syl Johnson, Renaldo Domino and the Notations), was looking for a band to record some of his songs, and in 1970 he found a single. agreement for the Kelderons with Twinight.

The session took place at Twinight’s modest Record Row studio at 2131 S. Michigan, and the resulting single became a Windy City classic. “To Love Someone (That Don’t Love You)” pretty much nails the soulful Chicago sound, with gooey falsetto harmonies for days, smooth turns, a fast pace that doesn’t stop, and strings painful added by session musicians. The other side of the coin, “You and Me Baby”, combines a spoken intro, urgent call-and-response vocals, a haunting fuzz bass and a touch of horns – the melody sounds a bit like “I Can’t Get Next” from the Temptations. over to you” with more grain on it.

Unfortunately, this 1970 single was only released as Promotion 45 for radio stations, and Twinight barely had a promotional department. It may have been released locally, but it was not offered for sale in stores. Naturally, the record sank without a trace, and original copies are now “rare groove” collectibles (the only one ever sold on Discogs went for $700 in 2020). The hub label also referred to the group as “the Kaldirons”, the kind of mistake that often happened distressingly on smaller labels at the time.

The band changed their name to accommodate the misprint, but it didn’t help their career. After six years of struggle, they dumped Burke, who was still their manager. The Kaldirons also renamed themselves the Solution – then, sadly, the Final Solution (whose sinister associations with the Third Reich apparently eluded them). But then they lucked out: trumpeter Paul Serrano, who was looking for bands for his fledgling label, got in touch.

Serrano had played with stars such as Art Farmer, Duke Ellington, Woody Herman and Mongo Santamaría, and from the late 60s he ran PS Studios, which eventually moved to 323 E. 23rd. The studio’s output included albums for Ramsey Lewis, Ahmad Jamal, the Emotions and Natalie Cole, and in the early ’70s Serrano launched a spin-off label called PS Records.

Serrano asked Final Solution to come and cut some tracks, but the sessions didn’t go particularly well at first. The band moved on when songwriter Carl Wolfolk, another Crane graduate, got involved – he happened to be working on his own demos at PS Studios. Wolfolk had co-written the 1968 hit “Can I Change My Mind” for R&B star Tyrone Davis, as well as material for the Dells and Little Richard.

In the 70s, huge hit soundtracks, especially super fly and Tree– caused a seismic shift when the world embraced the funky music from the movies. Chicago responded with The ghost that sat by the door, a satire on the CIA’s only black agent, shot locally and released in 1973, but Herbie Hancock’s score only reached the testing stage (and was bootlegged onto LP in the mid-2000s). Groundbreaking 1971 film by Melvin Van Peebles Sweet Sweetback’s Baadasssss Song used a young Earth, Wind & Fire, and 1974 Three the hard way (with Fred Williamson, Jim Brown and Jim Kelly) presented the Impressions. The very chicagoan film of 1978 stony island had a slamming soundtrack of top musicians, including saxophonist Gene Barge and future members of soul-funk band Maxx Traxx.

In the mid-70s, Chuck Colbert Jr. threw his hat into the ring. He had played bass in the hit garage-pop band The American Breed (“Bend Me, Shape Me”), and he later worked as a producer, session vocalist, and jingle writer, among other things. His father was something of a Svengali of the music scene, and he gave Colbert the task of supervising the music for an upcoming Blaxploitation movie. Title Brotherthe movie didn’t have a finished script yet, but it did have a catchy tagline: “The pusher who became a preacher.”

Wolfolk wrote the entire score, including the highlights “Theme From Brotherman” and “No Place to Run”. During the Brother sessions at dB Studios (676 N. LaSalle), the final solution laid down the basic tracks while Wolfolk added the guitar (and as I mentioned earlier, his instrument tuned and detuned). By the time the project collapsed in 1975, the tunes were still rough mixes, with vocals and guitar providing rough outlines of the fuller arrangements to be recorded later. The score is still listenable and funky, however, and the absence of the projected string and horn parts has the unintended side effect of highlighting the tight vocal harmonies of the final solution.

After the producer-investor squabbles soured Brother, the Final Solution fell back on the club circuit, and their professional frustrations were exacerbated by Brown’s worsening drug problem. The band fired him after he missed an important audition, but they couldn’t find a replacement who could match his falsetto. This upheaval eventually led to the demise of the Final Solution.

Wolfolk acquired the rights to the unfinished Brother gear from Colbert’s father, but his attempts to shop the tracks around Los Angeles came to nothing. The tapes ended up in a closet and the Kelderon story seemed to be over.

Fast forward to the 2000s when local reissue label Numero Group Label was working to license the Kelderons/Kaldirons single for the 2007 compilation Quirky soul: Twinight’s lunar rotation. At that time, no one at the label even knew the names of the members. Chicago soul guru Bob Abrahamian provided advice – he knew the band had been fronted by Marcellus Burke – and Numero’s Rob Sevier was able to contact Burke. Luckily, Burke met one of the Kennedy brothers at a grocery store and learned their band’s name at the time, which helped Sevier track them down.

In his first conversation with Sevier, Darrow Kennedy alluded to an album the Kelderons had recorded which put Numero on the trail of the Brother score. Finding the soundtracks was no small feat, however. Wolfolk had given them to Kennedy to keep (he had had a run-in with the law), but by around 2005 he had reconnected to retrieve the reels. Numero’s team couldn’t reach Wolfolk by phone or email, so they eventually showed up at what they hoped was his home in the western suburb of Stone Park. Almost promising a reissue, they were able to come out with the tapes.

the elusive Brother soundtrack was released in 2008, more than 30 years after it was recorded. Wolfolk and the Kelderons were given another chance to get paid what they deserved for their great work – the upbeat and melodious “Gotta Get Through to You”, the catchy and soulful “To See You Again”, the funky, imbued with wah-wah” Brotherman theme. Obviously, I’m not the only listener who isn’t bothered by the guitar tuning – some of the songs have even been licensed for TV and movies.

Most old Kelderon still play in local bands, which is not the norm for Secret History stories – more often than not I have to conclude these stories by telling you how someone gave up music or died . So we’ll call it a happy ending – and a damn funky one.

The radio version of Secret History of Chicago Music airs on outside the loop on WGN Radio 720 AM, Saturdays at 5 a.m. with host Mike Stephen. Past shows are archived here.

What is Bluetooth and how does it work?