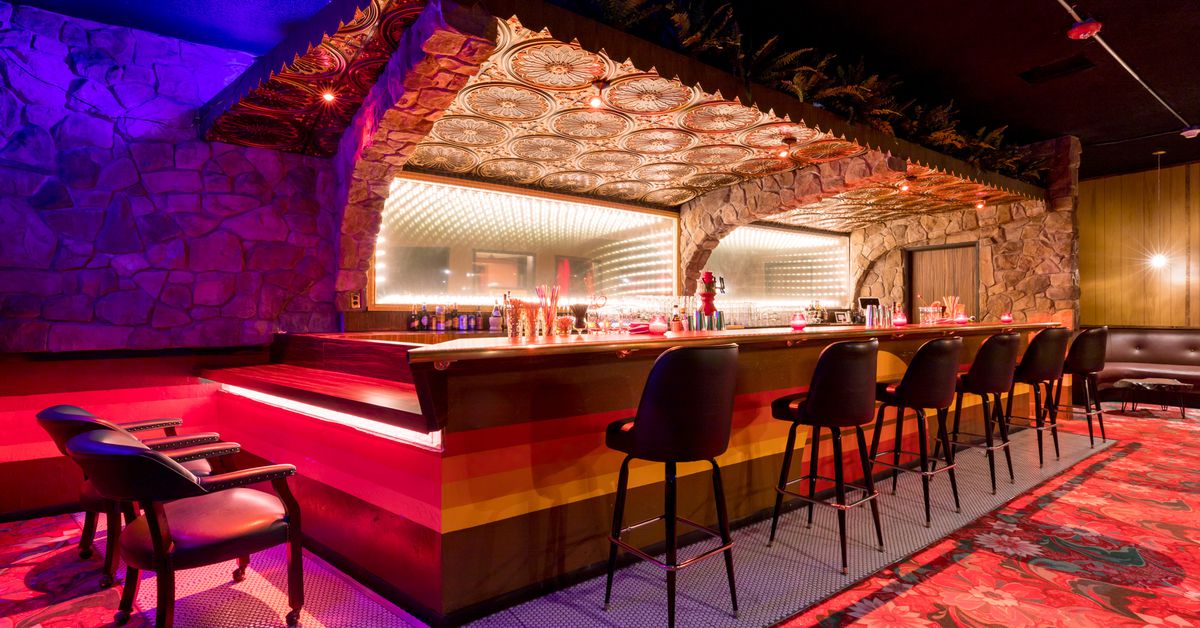 Stepping from the sidewalk of Telegraph Avenue into the dark confines of Oakland’s Thee Stork Club is like stepping back in time. Wood-paneled walls are dotted with velvet black lighting paintings, rising from a floor covered in swirling, casino-patterned carpeting; a faux rock facade found in dated California caves surrounds the bar, while an infinity mirror installation includes exposed light bulbs in warm hues reminiscent of an old episode of Solid gold.

These cosmetic updates are just part of the changes to Thee Stork Club, beyond the added “e” to the name. The bar and live music venue has long been home to the local rock scene, existing for decades as a space for musicians in Oakland and beyond. But this renovation did not make the space unrecognizable; instead, the venue’s update feels familiar to co-owners Marc Ribak and Billy Joe Agan, who both frequented the space in the ’90s and beyond. In early 2021, when the two discovered that the concert hall had closed with no plans to rehabilitate or demolish it, they decided to contact the previous owners to take over the space. Agan, co-owner of Oakland dive bar Eli’s Mile High Club, was in the midst of forced closures (and periodic reopenings) during the pandemic, while the music scene Ribak worked in led Oakland’s Total Trash Productions had interrupted the live shows. “With events and bar stuff, they basically said, ‘You can’t work right now. So we needed something to do,” says Ribak.

But the space was not just a project; it was also a chance to help revitalize the local music scene. Agan booked and attended shows at the Stork Club, while Ribak performed there in the 90s with Rock n Roll band Adventure Kids and launched Total Trash Fest (a night of punk music) at the venue. “We were seeing our local music scene dissolving during the pandemic: people were leaving the music scene, venues were closing, Eli’s was hanging on thanks to our savings,” says Agan. “It’s good that other things are coming back, but you need places like this.”

Once the property was secured, it was up to Agan and Ribak to bring the space back to life. With a list of artist friends and family to help out, the vision for the new Stork Club fell into place. “Since we started the process from the very beginning, Marc and I agreed that the place really had to be unique,” ​​says Agan. “It should reflect an aesthetic that not only fits Mosswood Meltdown, the festival that Marc puts on, but also that kind of garage rock, DIY music scene that we both come from, with a mix of Madonna Inn. It’s inspired by the kind of universe and genre of movies that we grew up really smitten with.

This camp influence is perhaps most visible in the back room, which is painted red – the floor, ceiling, cabins and light fixtures. Ribak and his wife Amy Carver relied on friend and filmmaker John Waters, known for his camp sensibility, as an influence on the club, as well as 1960s and 1970s horror films by Herschell directors Gordon Lewis and Kenneth Anger. But it also channels the 1960s vibe the bar is looking for. At its center is a detailed dollhouse remodeled by artist Ali Rose and outfitted with miniatures of Elvira, John Waters, and monsters one could stare at for hours. “Red rooms were a thing in the ’60s, so we thought it would be kind of a cheesy, tacky, garish red room vibe here,” says Agan. “The bar inside is more of a California dive bar modality, that kind of 70’s aesthetic turned back to nature, faux plants and cave vibe.”

Meanwhile, the concert hall has been updated with dramatic red velvet stage curtains – designed to “look like the setup from a crazy horror movie”, says Ribak – and an atrium with a disco ball gold and flashing marquee lights, befitting its retro surroundings. The atrium is a feature that Ribak and Agan suspect the previous owners were unaware of, through its years as a Chinese buffet restaurant, an Italian restaurant, and then, later, the (previous) Stork Club. But it’s a fitting update to spruce up the venue for performances as Ribak begins booking bands for the club. The mummies will be headlining three shows to kick off opening weekend on October 7 – with John Waters slated to host the first night – and Ribak is looking to continue with the style of music Mosswood Merger is known for bringing bands like The Linda Lindas together with Bikini Kill. “I like music that people can dance to or move to, music with a beat — it’s usually the rock and roll kind of punk music, or 60s-inspired stuff,” Ribak says. .

As for the food aspect of things, although a full kitchen is available to them, the group is still considering whether to use it. Meanwhile, Agan says they are planning for pop-ups or potentially allowing outside food intake. For the drinks side of the equation, Agan shows off his bartending skills, but in a playful way. He’s created a menu full of retro cocktails: appletinis, lemon drops, and fish bowls filled with blue curacao and Swedish fish all make the list. He also makes Harvey Wallbangers – brandishing a comically sized bottle of Galliano to boot – and combined with the bar’s polished brass railing, it makes patrons feel like they’ve stepped back in time.

“We don’t try to take it seriously at all, it’s kind of the fashion here,” says Agan. “We’re not really trying to win prizes or anything – we just want to have fun.”


Register to receive the newsletter