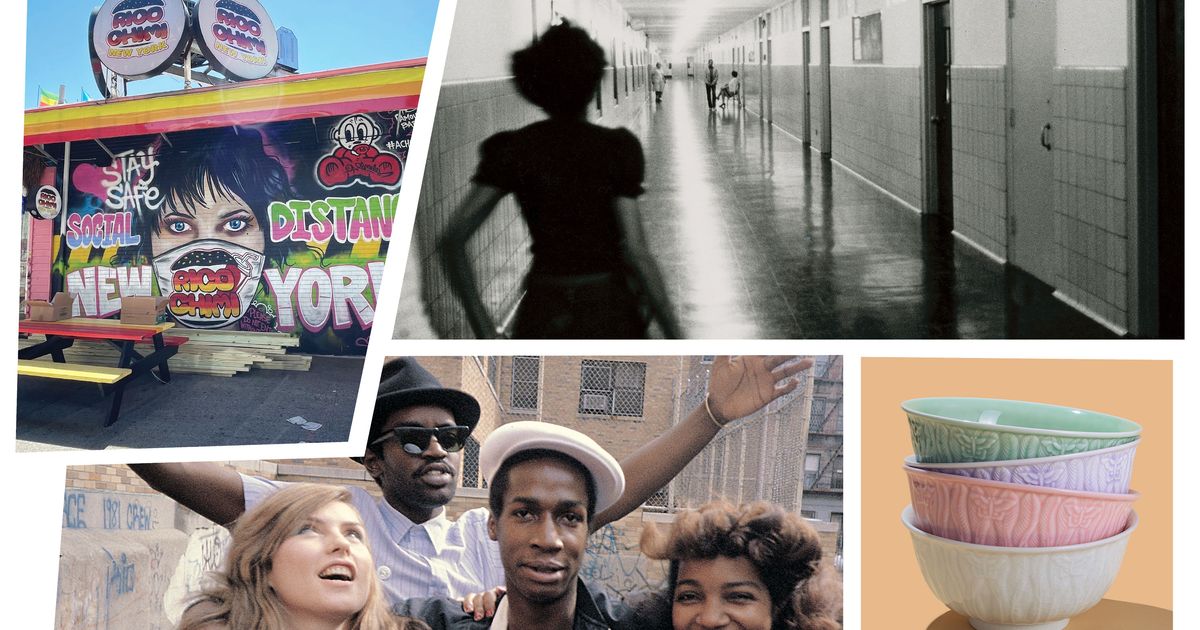 Every two weeks, I will collect and share objects, designers, news and events to know.

There’s a sprawling exhibit at the Museum of the City of New York on the music scene of the 1980s, a time when it seemed like every artist was eager to create something new and hungry to see and hear what it all did. the world was doing. Sean Corcoran, the show’s curator, describes the era as “an era of genre-defying creativity and performance which, in my opinion, is one of the most influential in musical and cultural history.” Movies like Wild style and the clip of “Raptureâ€Gave me a glimpse of how the city’s music scene was electric before Koch cracked down on nightlife and the redevelopment shut down iconic venues. The exhibit attempts to recreate that energy by focusing on a handful of shows at venues like the CBGB, Danceteria, and Mudd Club. But the piece I lingered on the most was a 1980 silkscreen painting by Wild style director Charlie Ahearn of hip-hop artist Dot-A-Rock and his collection of flyers. Seeing who was performing with whom, in which locations, and all the hand-drawn lettering and illustrations summed up the energy of the era. Until June 2022.

Last spring, the designers of Standard issue, a consulting firm in Gowanus, began photographing the open restaurants they spotted in their neighborhoods. They didn’t know what they would do with all the pictures while they were taking them, but now they can be found in Al Fresco: resilience in New York, the first streeterie book that landed on my desk. It’s a treat to flip through. The book captures a very specific moment in early street design, after ad hoc structures survived their first winter and before some of the more elaborate architectures began to emerge. â€œA friend called the hangars contemporary urban folk art,â€ says Standard Issue partner Michael McGinn. “We would like to think our little snapshot of the hangars in New York City tells that story.” The studio initially sent the book to friends and clients, but are planning a second print run as many people have requested copies. They are not yet available for sale, but if you are interested in any of them please drop a note to [email protected]

There are still a few weeks to see In Foco: the Puerto Rican experience of New York, 1973-1974. Charles Biasiny-Rivera, Roger CabÃ¡n and Felipe Dante, the founding members of the Bronx collective In Foco, created this collection of 79 images to ensure that the daily life of Puerto Ricans was portrayed in fine art photography. En Foco made the collection a fix to early 20th-century fine art documentary photography that “visually whitewashed an entire society,” according to Biasiny-Rivera. Images show small business owners courting at their lunches and barbershops, smiling migrant farm workers waving huge freshly picked cauliflower heads, and well-dressed students in a public school cafeteria . One of the images that stood out to me was the 1974 Biasiny-Rivera photo taken during a demonstration at the PS 188 in response to the school board’s dismissal of two co-principals: a woman sits, resting her hand on her chin – much like Dorothea Lange’s Migrant mother – while holding a protest sign against racism in the school system. It’s a scene that could have happened today. Photographers donated the 79 images to El Museo, which exhibited them in 1979. This is the first time the entire collection has been exhibited since then. Until February 27.

Chinatown’s oldest boutique features an ever-exciting contemporary art program, led by fifth-generation owner Mei Lum. Next week, Wing On Wo & Co. is launching a new series of artist collaborations with the WOW creative team focused on Lunar New Year. These bundles, which will be rolled out over the next month, include a set of bok-choy bowls; a cerulean plateau through Tiffany saw to share candies and treats that represent abundance; and a gourd-shaped wine set by Saw and Tomie arai for an altar accompanied by gourd-shaped candles and clementine. These sets beautifully show how traditional sacred objects and rituals can be updated with a modern perspective.

With flurona spreading across the country, entertaining at home seems like the only responsible way to see friends. I am therefore considering improving my dishes so that sharing a meal is a little more special. I watched these 80s Bodum glasses that the MoMA Design Store has reissued for its fall-winter collection. Since the start of the pandemic, the team has relied more on digging through the archives, as it has been difficult to visit trade shows to research new products. Annie Auchincloss, one of the MoMA Store buyers, got her hands on some old Bodum catalogs in which she saw these big geometric glasses and worked with the brand to bring them back. Goblets, martini glasses and champagne flutes are dead bells for the original 1983 products – same colors, same shapes – but are made with recycled plastic.