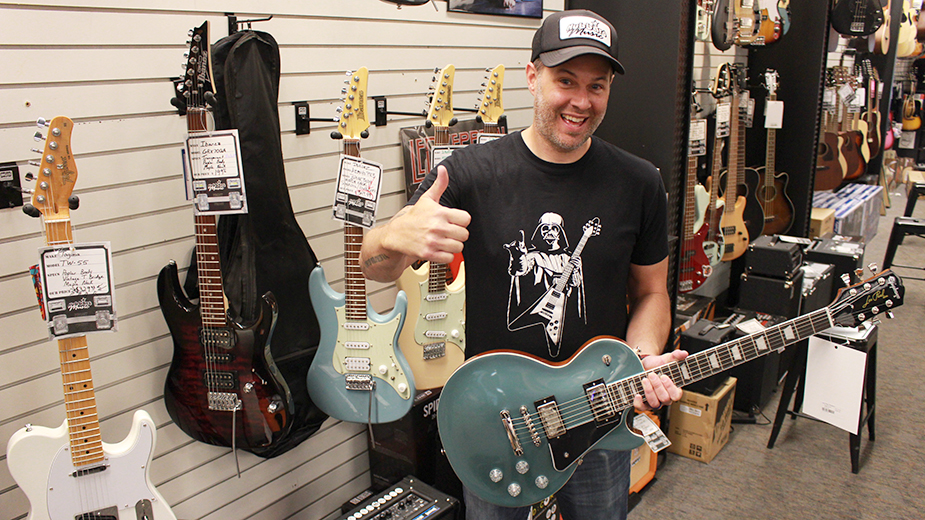 “I bought a business in the middle of a pandemic,” he laughs.

Yet the biggest leap probably came 15 years earlier, when McFarland, who has a degree in sociology and legal studies, abruptly quit his job in social work.

“I noticed that my mother hated her job and that my co-workers, who had worked there much longer than me, hated their jobs,” McFarland says. “I quit with no plan or other work in sight. I wanted to force myself to find something I enjoyed doing.

So he took a job at Hubbard Music in Hubbard as a “placeholder” until he could find something else.

“I told the previous owner that I was probably going to work here for a month or two and then I was here for 15 years,” McFarland says.
Former owner Mark Tirabassi started Hubbard Music in 1990 and expanded with a second location inside Eastwood Shopping Center in Niles in 2014.

McFarland, who spent time playing guitar in the Robbie J Band, says he knew right away he wanted to stay. “I graduated from college. I have a degree and I think it’s great to be able to come to work in a t-shirt and a baseball cap every day,” he says.

So in 2020, when Tirabassi’s son decided to go to medical school instead of working in the family business, Tirabassi offered to sell Hubbard Music to McFarland.

“I love the customers, the relationships we build. Our customers become our friends. They become our employees,” says McFarland.

One of those customer-turned-employees is TJ Rusk, a salesman who’s been coming to Hubbard Music since he started drumming in his freshman year at Ursuline High School.

Rusk says he always wanted to work at the store and applied for a job as soon as he graduated. “We have a lot of expertise and know where to direct people to get the sound they’re looking for,” he says.

Rusk and McFarland are also focused on increasing the store’s social media presence with creative videos that showcase their irreverent sense of humor. “People love them. It entices people to watch the videos and makes them want to come in and see the store and what we’re getting,” says Rusk.

“The guitar is still very queen,” he says.

But one item that surprised McFarland with its popularity is the ukulele. Hubbard Music has approximately 25 ukuleles at its Eastwood Mall site. McFarland describes the number as “low inventory.”

“The ukulele is hot. I keep thinking it’s going to slow down, but it hasn’t slowed down at all,” he says.

The popularity of people picking up instruments to start a hobby or rediscover an old one has only grown during the pandemic, McFarland says.

Hubbard Music was forced to close for two months when the mall closed. But it saw huge demand for instruments as soon as it reopened.

“It makes sense if you think about it,” McFarland says. “People were stuck at home; so people chose hobbies or they went back to hobbies.

Hubbard Music began offering curbside pickup, but found customers didn’t want it, preferring to walk into the store to get a feel for the instruments.

Guitars, keyboards, “anything you could play on your own,” flew off the shelves, McFarland says.

“It was one of our best years,” although he says things have quieted down recently. “But I would say it’s only cooled because gas is $4.50 a gallon and groceries are more expensive.”

Another challenge the pandemic left in its wake was a severely disrupted supply chain, making it difficult for McFarland to source instruments. “What we have now is probably stuff we ordered last year,” he says.

Most instruments are made overseas, while those made domestically are “much more expensive”, he says.

For those not ready to buy, Hubbard Music also offers instrument rentals. The store rents just about any instrument students need for school bands.

The store also offers lessons for people who are just starting to play an instrument, which McFarland recommends. “That individual experience cannot be replaced,” he says.

The only lessons that aren’t available are for violin and voice, McFarland says.

Hubbard Music employs five salespeople. Subcontractors are used for repairs, courses and installations. “I always want people to come see something new and give them a reason to come back,” McFarland says, which is why he plans to expand his inventory as soon as possible.

“Guys want what they want. Just because we have six-string pieces of wood out there doesn’t mean it’s the one somebody wants. They want options,” he says.

McFarland says that 10 years ago it was common for customers to come in and specially order an instrument that would arrive in seven to 10 days.

The rise of Amazon and overnight shipping has all but wiped out that part of the business. He is convinced, however, that he can serve his customers even faster if he has what they want on his shelves.

“I think inventory is king now. If you have it, you’ll sell it,” McFarland says. “That’s the guitar I want. You can touch it, take it home. Nothing will ever beat that.” »

Pictured above: Rob McFarland says sales surged during the height of the pandemic when “people were stuck at home”.

DONNIE JOHNSTON: Back then a bicycle was an instrument of independence | Lifestyles