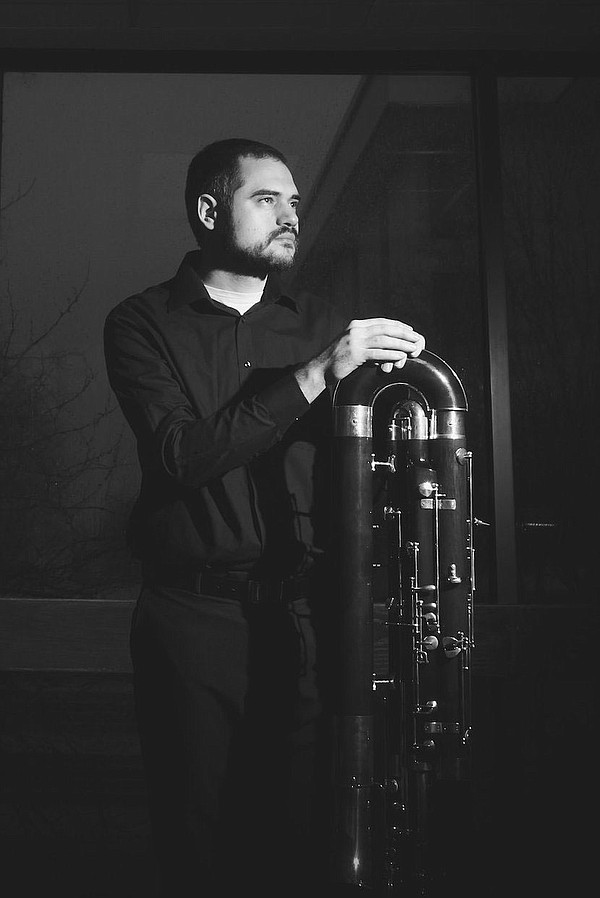 This is how Jason Miller, Executive Director of the Arkansas Philharmonic Orchestra, presents Bobo and a September 1 event that is both an orchestral world premiere and “a very rare treat to behold with an orchestra.” Bobo wrote the new arrangement of composer Barbara York’s “The Sunken Garden” and will play it on the Symphony of Northwest Arkansas contrabassoon, the purchase of which was made possible by a grant from the Willard and Pat Walker Charitable Foundation .

“Orchestral solo works typically feature the most respected, prestigious, and demanding instruments — instruments such as the violin, piano, or cello,” says Bobo, who grew up in Rogers and attended the University of Arkansas. “At the other extreme you have my instrument, the contrabassoon. It’s a bigger, lower version of the already wide and deep bassoon, and its job in the orchestra is usually to play notes that are too extreme even for the tuba or the double bass.

“That’s when it’s included, which often isn’t,” he adds. “So a serious contrabassoon solo is one of the rarest orchestral events.”

“The Sunken Garden” was written by Canadian-American composer Barbara York.

“She lived and worked in Pittsburgh, Kansas, and was an esteemed part of our regional classical music scene until her untimely passing in 2020,” says Bobo. “She originally wrote the work for contrabassoon and piano, and used both instruments with great character and variety throughout the work’s four movements.

“In preparing this orchestration for contrabassoon and chamber orchestra, I sought to preserve this spirit with a set of diverse and flexible instruments”, he continues. “Furthermore, the contrabassoon is – perhaps surprisingly for its size – a somewhat soft instrument, so great care has been taken to complement the solo without overpowering it.”

“It is exceptionally rare to hear the lowest-voiced instrument of the orchestra in a solo work with orchestra,” adds Steven Byess, Music Director of APO. “In the words of Ms. York: “The concept of this piece involves overcoming darkness in oneself as well as in others, and you will find musical material used and then reused later in a different context and with temporal resolution and more positive ending as the moves progress.'”

Bobo has played bassoon throughout his career in the region, including with APO, SoNA and the Tulsa Symphony.

“Several years ago, Kay Brusca and I founded Fayette Junction Bassoons, the Northwest Arkansas bassoon quartet that has worked with APO many times,” he says proudly. He recently began teaching bassoon at Arkansas Tech University in Russellville, and he designs and builds the world’s first “sub-contrabassoon, an orchestral instrument that can play down to the lowest range of the pipe organ, right here in northwest Arkansas”.

“It will be surprising and enchanting to hear the exotic contrabassoon play an extremely wide range of notes and be a melodic tour de force,” says Byess. “The program creates the opportunity to see this incredible instrument up close, in front of the orchestra rather than behind it, and will provide audiences with the rarest of opportunities to experience this magnificent, giant instrument as a soloist.”

“The Piazzolla is also exotic because of its delicious, sensual and enchanting tango-infused musical language,” says Byess, adding that it “features the vast talents of our incredible concertmaster, Dr. Er-Gene Kahng. The range of virtuosity is enormous, for the solo violin and for the string orchestra that accompanies the soloist.”