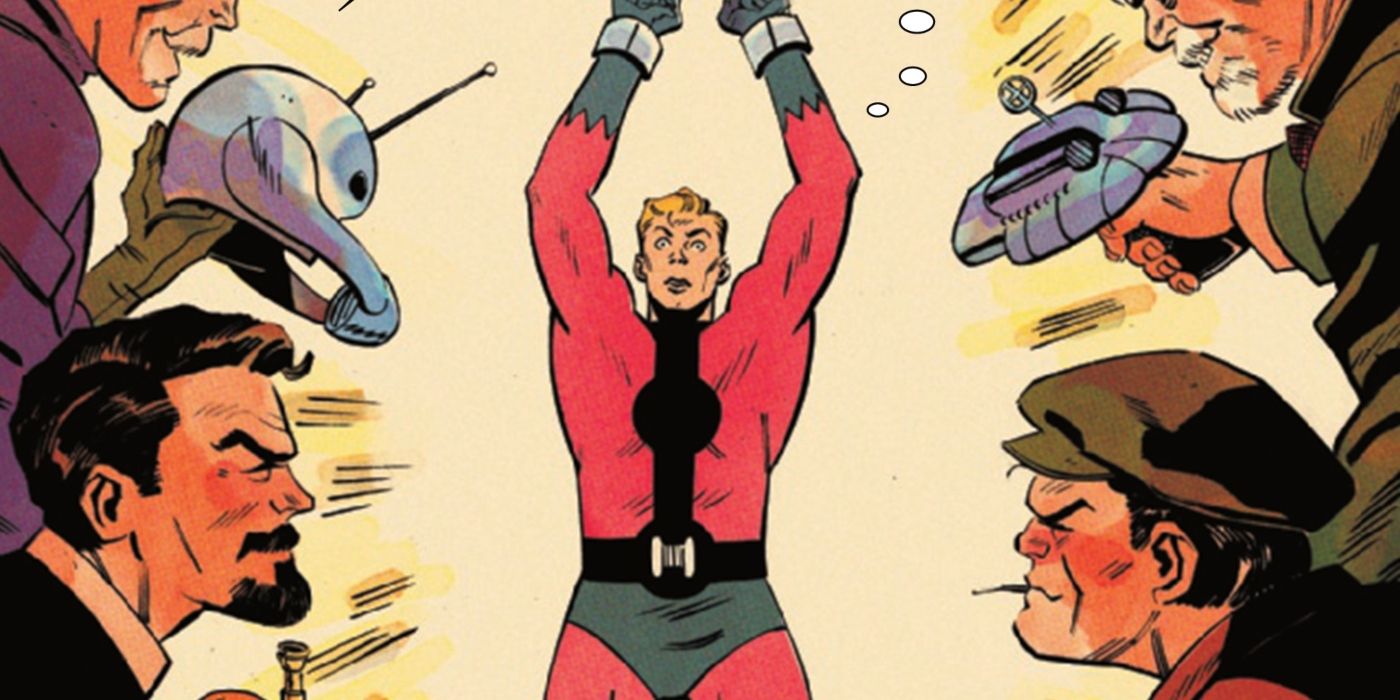 The following contains spoilers for The ant Man #1, on sale now from Marvel Comics.

Hank Pym takes on the worst of his gallery of Silver Age thieves in Ant-Man #1 (by Al Ewing, Tom Reilly, Jordie Bellaire and Cory Petit of VC). Marvel celebrates sixty years of adventures with the Tales to Astonish hero by returning to the beginnings of the founder Avenger. Ewing and Reilly perfectly recreate the Silver-Age style, introducing the new Ant-Agonists – the Window Washer, Trago, Time Master and the Protector – to a new generation of readers.

The comic begins with Hank Pym and Janet Van Dyne enjoying a movie at the theater. They are interrupted by a number of youngsters whom Pym uses his ant control powers to put them in their place. Shortly after, Pym is visited by the Ant-Man from the future, who zaps Pym’s ants with a mysterious energy beam and thanks a bewildered Hank for his important scientific accomplishments.

Hank pursues his successor until the man from the future disappears, instead running into the Window Washer, a villain Ant-Man first faced in Tales to Astonish #41 (by Stan Lee and Larry Lieber). The villain seeks revenge on Pym for an earlier defeat and works alongside another classic Ant-Man foe, the magic trumpet-wielding Trago. Considered one of the weirdest villains of all time, Trago first appeared in Tales to Astonish #47 (by Lee and Don Heck), using his weaponized musical instrument to mind control anyone unfortunate enough to hear the thief and the jazz musician play a tune.

Pym’s partner, the Wasp, manages to track down Ant-Man in the issue only to find he’s been captured by the Ant-Agonist, his own collection of villainous thieves. Besides the Window Washer and the Trago, the group also includes Time Master and the Protector. Although the latter is the leader of the group and appears the earliest in Tales to Astonish #37 (by Larry Lieber, Lee, and Jack Kirby), the Time Master is clearly the most dangerous member of the quartet, turning Pym into an old man during their initial confrontation in Tales to Astonish #43 (by Lee, Lieber, and Heck ), and repeating the feat in Ewing’s The ant Man #1.

RELATED: 50 Years Ago Ant-Man Was Trapped in a World He Never Created

The issue serves as a fun celebration of the little Avenger’s 60th birthday, introducing an untold story from Hank Pym’s past and giving it a modern, futuristic twist. The addition of Ant-Man’s “Ant-Agonists” as featured villains adds to the excitement, while simultaneously introducing a new generation of fans to some of the hero’s oldest foes.

Ant-Man #1 has a lot to offer, and the idea of ​​making these old villains the Ant-Agonists is great. It sets the mood perfectly for new fans to immerse themselves in classic Ant-Man adventures, but with a contemporary sensibility. The playful innocence drawn here by Ewing and Reilly, deftly captures what drew children to comics in the late 1950s, and is a fitting celebration of Ant-Man’s sixty-year history.