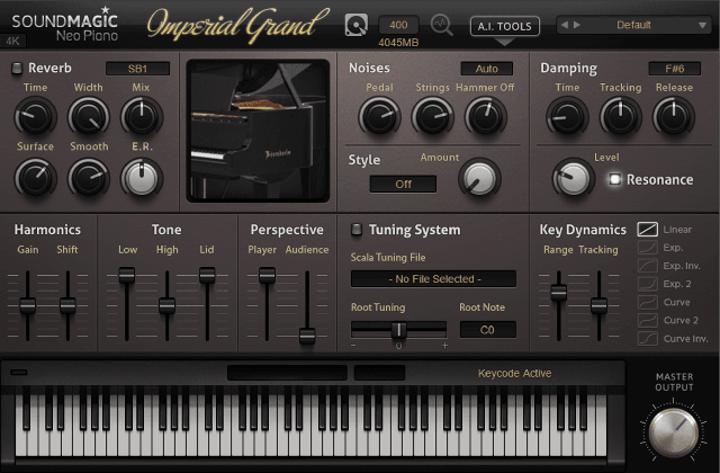 Affordable Bosendorfer for your DAW

sound magic announced the availability of Neo Piano Chapters: Imperial, their latest hybrid modeling virtual instrument for Mac (AU 32-/64-bit, VST 32-/64-bit) and Windows (VST 32-/64-bit), which they claim aims to deliver a sound of Highest quality piano with an affordable price. That’s what they have to say about it…

Neo Piano Chapters: Imperial features one of two piano sets from Imperial Grand, which is also one of Sound Magic’s oldest pianos, nominated for the 29th TEC award. Sampling from a special edition Bosendorfer 290 that has a famously rich and dark sound, the Bosendorfer 290SE establishes an incredible level of realism through hyper-detailed sound. From bass to treble, its rarity stands out in all musical genres from new age to classical.

Neo Piano Chapters: Imperial is powered by Hybrid Modeling and HD Velocity Layer 3 technology with High Dynamic Range (HDR) technology (supports up to 65,536 velocity layers) delivering a natural, expressively powerful pulse that can be felt with every keystroke. With the new Neo Piano engine, which achieves 400 times more variations than a traditional sampling engine, every note played is unique, creates a vivid sonic representation, and produces a rich, precise sound even with small movements. Essentially, it’s an instrument with a musical soul instead of a machine feel. Moreover, in this new version, we allow you to experience it in a system that only supports 127 velocity layers by applying HDR. This makes this technology usable at no cost for upgrading your MIDI system.

Resonances play an important role in the sound of a piano. It adds extra beauty to the overall sound. The reality is that the large soundboard of each grand piano reflects the sound that resonates in conjunction with the wooden body of the instrument itself. Indeed, it is this continuous process that makes each note played so unique. Ultimately, in order to simulate this behavior, Sound Magic captured multi-angle IRs (impulse responses) from the soundboard, then used modeling technology to convert those IRs into multi-dimensional resonance algorithms. The result? Amazingly true-to-life concert hall sound readily available at anyone’s fingertips!

Intersect Palm Springs, Modernism Week leads things to do in the desert

The Weeknd officially has the most monthly listeners on Spotify